In Memory of
George Newton
Tillman
1928 - 2020
Click above to light a memorial candle.
Memorial Candle Tribute From
Williamson Memorial Funeral Home and Cremation Services
"We are honored to provide this Book of Memories to the family."
View full message >>>
Send Flowers
Plant a Tree In Memory of Your Loved One
Click Here
Menu 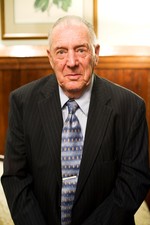 George Newton Tillman, age 92, of Franklin, died peacefully at his home on October 29, 2020. His was truly a life well lived. Born in Nashville, TN April 20th, 1928 to the late Lewis and Angeline Watson Tillman. Newton spent his childhood at Tillman Place in East Nashville as part of the third generation to inhabit the old family home. After the death of his father in 1947, the family purchased a farm in Williamson County and moved “to the country”. He graduated from Peabody Demonstration School and attended MTSU.

He married Sidney Katherine Hart in 1953 and they spent 57 happy years together until her death in 2010. He was deeply devoted to his wife and loved his family dearly. Together they raised three children: Nora Katherine Summar (Donald), Sidney Louise Tillman (Daniel), and George Newton Tillman, Jr. In addition to his children, he is survived by four grandchildren: Talmon E. Melton(Tara), Kathryn L. Spencer, DDS(Charles), Jessica C. Grider(John), and George C. Hoover(Alexa), and five great grandchildren: Nora Kathryn Spencer, Charles Tillman Spencer, Daniel Davis Grider, Sidney Claire Grider, and Cora Eleni Hoover. He is preceded in death by siblings Angeline Tillman and Lewis Tillman.

Mr. Tillman began his career as a salesman in the wholesale chemical industry with CY Hart Distributing Co. in the early 1950’s and went on to become the owner/President in 1977 at the death of his father-in-law, Mr. Hart. He loved his job and always enjoyed talking to his customers, telling wonderful stories and jokes. He also dearly loved working outdoors on his farm in Williamson County raising cattle, gardens and tobacco. He often joked that he needed his “real job” in order to afford his farming habit. He was loved by all who knew him and witnessed his cheerful personality, positive outlook on life, integrity and kindness. He was a longtime member of the Franklin Historic Presbyterian Church and a follower of Christ. Newton is surely dancing in heaven now, just like he did on Saturday nights on the Grand Old Opry stage as a young man.

Visitation will be Sunday, November 1st from 5-7 at Williamson County Memorial Funeral Home and one hour prior to the 11am service at Franklin Historic Presbyterian Church, 435 Main Street, Franklin, Tn 37064 on Monday, November 2nd, exactly 10 years to the day of his beloved wife’s passing.