In Memory of
Paul Claybrook
Locke
1932 - 2021
Click above to light a memorial candle.
Memorial Candle Tribute From
Williamson Memorial Funeral Home and Cremation Services
"We are honored to provide this Book of Memories to the family."
View full message >>>
Send Flowers
Plant a Tree In Memory of Your Loved One
Click Here
Menu 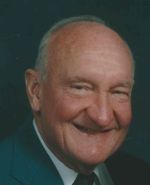 Paul Claybrook Locke was born December 2, 1932, the eldest son of Sam and Dora Locke. He passed from this world into eternal life on January 24, 2021.
He attended Hume Fogg Technical School, Nashville, Tennessee, graduating in 1951. He received his Bachelor of Science degree from George Peabody College, Nashville, in 1957, and his Master of Arts in Accounting, also from Peabody, in 1958.
He was the first person in Tennessee to achieve simultaneous certifications in Accounting (CPA) and Data Processing (CDP).
Paul served 8 years in the regular Army and Reserves, from March, 1953 until his Honorable Discharge as a Staff Sergeant in March, 1961. His most significant assignment was as a Heavy Weapons Infantryman/Squad Leader, Company M, 136th Infantry Regiment, Fort Benning, Georgia.
After graduation from Peabody, Paul worked for AVCO/Textron from 1958 until his retirement in 1996, whereupon he was immediately re-hired as a contractor to complete the project on which he was working.
A Man of Steel and Velvet, Paul gently, lovingly, yet firmly guided his family and the Lord’s church. He faithfully served the Harpeth Hills Church of Christ as an Elder for 38 years, longer than any other. As an Elder, he mentored younger generations of Deacons and Elders, modeling true servant leadership. He oversaw both domestic and international missions, visiting multiple states, plus Canada, Honduras, and Scotland.
He served on the Boards of Churches of Christ Disaster Relief, Tennessee Prison Outreach Ministry, Nashville Inner City Ministries, and Healing Hands International.
Paul and Evelyn Holley were married on November 30, 1957. Over the years, they enjoyed travelling throughout the United States and abroad to Canada, England, Scotland, Egypt, Israel, and Honduras. Throughout his life, they enjoyed many hobbies, including raising and showing Tennessee Walking Horses and champion Doberman Pinschers. Paul’s favorite pastime, however, was being “Papa” to his four grandchildren.
Paul was preceded in death by his parents, Sam and Dora Locke, and his brother and sister-in-law, Dan and Inita Locke. He is survived by his wife of 63 years, Evelyn; three daughters: Holly Locke of Franklin; Paula (Mike) Sanders of Columbia; and Dawn (David) Lewis of Franklin; and four grandchildren: William Sanders, Samuel, Ruby, and Tabitha Lewis.
Visitation and funeral will be at Harpeth Hills Church of Christ, 1949 Old Hickory Blvd., Nashville, TN.
The family will receive friends two hours before the memorial service, beginning at 11:00AM on Wednesday, January 27, 2021. Military honors will be at 1:00PM, with services immediately following. Burial will be at Harpeth Memory Gardens on Highway 100. The memorial service will be conducted by Chris Smith, Jason Thompson, Stan Ezell and Gary Waller.
Mike Sanders, William Sanders, David Lewis, Samuel Lewis, Tony Locke, and Keith Locke will serve as active pallbearers.
The past and present Elders of Harpeth Hills Church of Christ, along with Gary Waller, Jason Pagel, and Glen Beville, will serve as honorary pallbearers.