In Memory of
David L.
Morgan
1935 - 2021
Click above to light a memorial candle.
Memorial Candle Tribute From
Williamson Memorial Funeral Home and Cremation Services
"We are honored to provide this Book of Memories to the family."
View full message >>>
Send Flowers
Plant a Tree In Memory of Your Loved One
Click Here
Menu 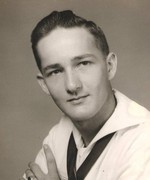 David L. Morgan, born May 24, 1935 (the middle of the great depression) in High Point, NC, the youngest often children of David Early Morgan and Polly Lily Ann Whitley.
David grew up in Lexington, NC; attended Holt School and Lexington High School, class of 1953. Continued a high school employment with Ketner's Super Market where he was the youngest person named a Department Manager (Produce Department). Enlisted in U.S. Navy 1956 receiving an honorable discharge as Air Controller 2nd class petty officer in Dec. 1959. Employed by Buck Young Oil Company, Inc. in June, 1960 and served as Secretary-Treasurer until transferring to Maybelle Transport Company serving the same capacity. Moved with family to Franklin, Tn when the company was acquired by Fleet Transport Company in Nashville, TN where he served as Safety Director and Vice President of Safety. Retired m 1997 with brief employments in driver hazardous materials training and property manager for several properties with Ghertner Company. Married to Betty Jo Robinson in June, 1960 who passed away on September 12,2011.
He is preceded in death by his parents and nine siblings, his wife, Betty Jo Morgan and his son, Michael Morgan.
David is survived by son, Rev. Joel (Rita) Morgan of Pace, FL; daughters, Jody Putman and Lisa Morgan of Franklin, TN; grandchildren, Morgan Putman, Caleb (Gabby) Morgan, Eli Morgan, Anna Catherine Morgan and Benjamin Morgan.
A graveside service will be held 3:00PM Sunday, February 28, 2021 in Williamson Memorial Gardens, visitation will be held two hours prior at Williamson Memorial Funeral Home