In Memory of
Charlotte Ann Jackson
House
1943 -
2021
Click above to light a memorial candle.
Menu
Send Flowers
Plant a Tree In Memory of Your Loved One
Click Here 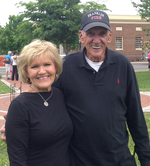 Charlotte Ann Jackson House, age 77, of Franklin, TN departed this life on April 4, 2021. Charlotte was a devoted wife and mother, and incredibly loving family member to many loved ones. She will also be remembered as a caring friend to many neighbors, community and her church at Walker Memorial. Charlotte and Ed are still together and there is no doubt in our minds, in Heaven, at peace and in God’s arms. She retired from the City of Franklin Finance Department. Charlotte and her loving husband, Ed were married for 55 years, after meeting at the Franklin Theater. They loved their walks together downtown Franklin and greeting their neighbors and friends with smiles.
She was preceded in death by her parents, Joe Daniel Jackson and Louise Bagsby Jackson. Survivors include her devoted son and daughter-in-law, Eddie and Jenny House. Sister, Mary Jo (Wayne) Hailey, Brothers, Curtis (Linda) Jackson, Jimmy (Cherry) Jackson, Dan (Joann) Jackson, Murray Jackson, Charlie (Judy) Jackson, Mike Jackson, several nieces and nephews, and their four-legged companions, Cody and Bailey.
Graveside Services for Charlotte and her husband, Ed will be held on Thursday, April 8, 2021, at 2:00pm in the Williamson Memorial Gardens, with Jim Taylor officiating.
A graveside visitation will take place prior to the service, 12:00pm – 2:00pm.
Pallbearers are Bruce Osburn, Charles “Bubba” Alexander, Terry Hood, Tim Hood, Todd Horton, Glenn Johnson, Greg Baltimore, Clay Mackey, Scott Mainord, Anthony Sedlak, Rodney Ballington, Darren Barnes and Joe Hill.
Honorary Pallbearers are all members of the Franklin Fire Department, Williamson County Rescue Squad, and Spring Hill Fire Department.
In lieu of flowers, memorial donations may be made to Walker Memorial Baptist Church or the Williamson County Rescue Squad.
Williamson Memorial Funeral Home, 3009 Columbia Ave. Franklin, TN 37064
615-794-2289
williamsonmemorial.com