In Memory of
Harry Lee
Billington
1925 - 2021
Click above to light a memorial candle.
Memorial Candle Tribute From
Williamson Memorial Funeral Home and Cremation Services
"We are honored to provide this Book of Memories to the family."
View full message >>>
Send Flowers
Plant a Tree In Memory of Your Loved One
Click Here
Menu 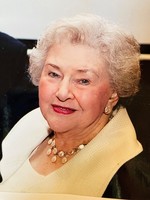 Mrs. Harry Lee Billington, age 96 of Franklin, TN passed away May 10, 2021. Harry Lee, named for her father, was born March 11, 1925, in Tazewell County, Virginia to Irene and Harry Lee Thompson. She was raised on a large cattle farm in The Highlands of Southwest Virginia where her father was the largest U.S. exporter of “fat cattle” to Europe and to New York City. She attended Mary Baldwin College, The University of South Carolina where she pledged Chi Omega, and finished at The University of Tennessee with a Bachelor of Arts. In 1949, she married William Wallace “Billy” Billington and made Franklin, TN her home. She was the busy mother to her own three children, as well as the neighborhood children. She was a founding member of the Carnton Association, former board member of The Heritage Foundation of Franklin, member of The Centennial Club of Nashville, and an active member of The Historic Presbyterian Church of Franklin. She enjoyed playing bridge, her sewing club, and was a genealogy buff. She had an amazing recall of fine details. Her love of antiques evolved into a partnership of The Heritage House Antiques in Franklin in the 70’s. She loved Monteagle, Tennessee where she was a member of the Monteagle Sunday School Assembly. She enjoyed her summers spent on her Monteagle cottage porch visiting every person who strolled by with an invitation to come sit and rock for a bit. Harry Lee was preceded in death by husband, William Wallace “Billy” Billington, and son in law, Kent Coleman. Survived by: children, Anne Cecil Coleman; William Wallace (Ellie) Billington, Jr.; Mary Ward “May” (Jim) Tansey; grandchildren, Mary Wallace (Matthew) Broome, Kathleen Elliott (Jeb) Lovvorn, Eleanor Caldwell (Matthew Mlynarczyk) Billington, William Wallace (Ceci) Billington III, James Sanford (Emily) Tansey and Alexander Ward Tansey; great grandchildren, Mary Kingsley Broome, Patrick Billington Broome, Anne Winston Lovvorn, Kathleen Marian Lovvorn, William Wallace Billington IV, Grace Gadsby Billington and one more “great” to arrive in July. Visitation with the family will be 9:00 – 11:00 AM Thursday, June 17, 2021 at Historic Franklin Presbyterian Church, 435 Main St, Franklin, TN 37064. A Celebration of Life Graveside Service will be immediately following the visitation at Mt. Hope Cemetery with the Reverend Toby Mueller officiating. There will be an additional graveside service at the Monteagle Sunday School Assembly on June 19, 4:00 p.m. with the Reverend James Knox Polk Van Zandt officiating. The family extends their gratefulness to Elvi Boza for the love, care, and friendship she shared with Harry Lee. Memorials may be made to Historic Franklin Presbyterian Church, P.O. Box 323, Franklin, TN 37065 or The Monteagle Sunday School Assembly, P.O. Box 307, Monteagle, TN 37356. WILLIAMSON MEMORIAL FUNERAL HOME, 615-794-2289 williamsonmemorial.com