In Memory of
Frances F.
Griffin
1934 - 2021
Click above to light a memorial candle.
Memorial Candle Tribute From
Williamson Memorial Funeral Home and Cremation Services
"We are honored to provide this Book of Memories to the family."
View full message >>>
Send Flowers
Plant a Tree In Memory of Your Loved One
Click Here
Menu 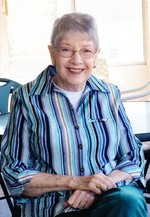 Frances was born in Lawrenceburg to William Hooper and Willie Mae Fleeman on December 17, 1934. A graduate of Lawrence County High School, she married Harlon Griffin, of Loretto, on November 13, 1954. She worked as an administrative specialist in many organizations as they traveled around the United States during her husband’s 28 years of service in the Air Force. Upon their return to Lawrenceburg, she was involved in numerous ways with life of First United Methodist Church.

Frances is preceded in death by her husband Harlon and daughter-in-law Sylvia Griffin.

A memorial service will be held at 1:00 pm Saturday, July 17th, at First United Methodist Church of Lawrenceburg.

Memorials may be given to the world missions efforts of First United Methodist Church of Lawrenceburg.