In Memory of
Leonard Conrad
Pewitt
1929 - 2021
Click above to light a memorial candle.
Memorial Candle Tribute From
Williamson Memorial Funeral Home and Cremation Services
"We are honored to provide this Book of Memories to the family."
View full message >>>
Send Flowers
Plant a Tree In Memory of Your Loved One
Click Here
Menu 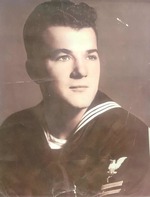 Leonard Conrad Pewitt
Short brimmed Stetson, starched jeans and ostrich boots complete the vision we carry of our father, Leonard Conrad Pewitt, fondly referred to as Chief by family and friends. A man of larger-than-life bearing, Chief left this world on Thursday July 15th, 2021 surrounded by his family and to the strains of his favorite Bluegrass Gospel.
Chief, 91, cherished his family, his 20 years of military service and loved ice cream, basking in the sun and sharing his vast knowledge of so many things with anyone who would listen! Many of his life guidance’s live on with us. A strong fitness drive led Chief in his senior years to compete in races and half marathons frequently winning his age group. He was a prominent figure on county roads during his 5 plus mile walks.
He was immensely proud of his ancestors’ role in settling Williamson County. Born in Jingo TN on August 19, 1929 with the assistance of his grandmother midwife, he left at a young age to join the Navy and eventually returned home with his family to live out his life in the county he loved. The 20 years that he served our country in the U.S. Navy included 16 years aboard ships where he engaged in the Korean War, the Vietnam War and traveled the world. Those years shaped and made the man we all knew and loved so much.
Leonard was preceded in death by his beloved wife of 63 years, Ruby Mae Simpkins Pewitt. He is survived by his daughters, Debbie Pewitt, Diane Pewitt, and Tammy Pewitt Holmes (Jeff), his grandchildren, Andrew Holmes, Alexandra Grissim (Andrew), Olivia Holmes, sisters Eileen Nichols and Doris Thompson, brother Joseph Pewitt and his great granddaughter Bennett Louise Grissim.
A celebration of life will be held over lunch at Southern Grace Farms on Sunday, July 18th, 2021 from Noon- 3pm at 5457 Waddell Hollow Rd, Franklin, TN. A military service, with honors, will be held at 2:00 PM July 20th at the Middle Tennessee State Veterans Cemetery, 7931 McCrory Lane, Nashville TN 37221.
In lieu of flowers, contributions in memory of Leonard are requested to go to the Navy-Marine Corp Relief Society. NMCRS.org